I truly am Generation Space!

I watched John Glenn become the first American to orbit Earth. I tasted apple sauce from a food tube like those that astronauts ate from and peeked inside a Mercury capsule that was touring the United States.

I told my grade-school principal that I wanted to be an astronaut when I grew up. She reminded me of this many years later when we served on a youth symphony board together.

I mourned three astronauts that were killed in the Apollo 1 fire. I stayed up late, practically all night, celebrating the first Moon landing and completely filled a scrapbook. I worried for days as Apollo 13 made its way back to Earth. 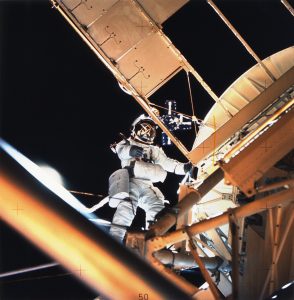 My co-workers and I wore aluminum foil hats and had party the day Skylab crashed in 1979. I was on maternity leave with my first baby, feeding her and watching live TV when we lost Challenger. I celebrated the first woman in space (missed my chance!). I’ve been fascinated by the spectacular images from Hubble.

I never did become an astronaut, but I’ve read my share of science fiction and watched lots of Star Trek. What a wonderful time to exist!