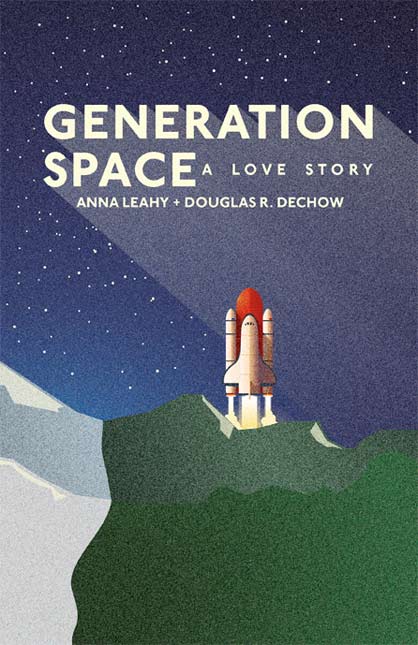 Anna Leahy and Douglas R. Dechow were children when Apollo 11 took humans to the Moon and were in college when the Challenger launch ended in tragedy. As Leahy and Dechow fell in love with each other at the National Air and Space Museum, millions of Americans in the generation that came of age with the space shuttle program continued to witness impressive innovations in space exploration. In 2008, serendipity took the couple to California for a new chapter in their lives and to follow the end of the US Shuttle program. GENERATION SPACE: A Love Story is the story of their life together and a love letter to the Space Age.

This book is great fun—an entertaining love story by two writers whose prose makes you feel you are in marvelous company, as you move from Leahy’s perspective to Dechow’s, and the whole thing is full of what I like to call knowledge-bearing sentences: the story of our involvement and fascination with space, and space travel, through their eyes, and in light of their love of each other. A sweet ride all the way.
—Richard Bausch, author of Before, During, After and Something Is Out There

The most important stories today reveal the connection between the personal and the historical; that is, they reveal how individual lives reflect the most important aspects of the broader culture. Good storytelling is the best form of understanding and education. Generation Space will appeal to a broad range of readers, and is a very human and compelling contribution to our understanding of how we all have been influenced by rapid technological change.
—Kristen Iversen, author of Full Body Burden

Anna Leahy and Douglas R. Dechow have written a book that is as delightful as it is instructive. The Challenger shuttle exploded on my eighth birthday, and in curious ways it seems that my life has been framed and punctuated by space travel; after reading this book, I understand why. If I’ve never felt comfortable with the label Generation X, it’s because I’m more accurately a member of Generation Space. Exploring linguistic subtleties and technological details, ranging across scientific anecdotes and poetic insights, Generation Space: A Love Story is truly an adventure, and a discovery.
—Christopher Schaberg, author of The End of Airports

In this engaging and deeply reported memoir, Anna Leahy and Douglas R. Dechow capture the unique mixture of nostalgia, hope, and derring-do that surrounds humanity’s successful attempt to puncture the veil of space. Generation Space is a book that will resonate with the children of that Apollo era and one that asks the urgent question that few seem wiling to answer in the 21st century: where do we go from here?
—Tom Zoellner, author of Train

Generation Space is an engaging tale of two love affairs: the authors’ love for one another and America’s fascination with lunar landings and interplanetary travel. Like twin moons in similar orbits, the stories become inseparable. Kudos to Anna Leahy and Douglas R. Dechow for reminding us of all the reasons we constantly reach for the stars.
—Dinty W. Moore, author of Between Panic & Desire

Generation Space presents a unique and personal history of the American space program, focusing not so much on NASA’s already well-documented pioneers or the iconic astronauts and technicians of the moon landings, but on what came after: the space journeys of the past few decades, journeys that have retained the fascination, romance, and adventure of their more widely publicized Mercury, Gemini, and Apollo predecessors. Told in alternating chapters by the married couple Anna Leahy and Douglas R. Dechow, a poet and a scientist, this fascinating history is interwoven skillfully with the story of their partnership, shared passion, and personal explorations. “Following the shuttles reminded me that I’d had childhood dreams, that life is full of potential,” writes Dechow. Generation Space is likewise inspiring.
—Gordon McAlpine, author of Woman with a Blue Pencil and The Misadventures of Edgar & Allan Poe series

GENERATION SPACE is distributed by Ingram.