If delays hadn’t occurred, Shepard would have been the first human in space. He wasn’t.

Instead, during those delays, Yuri Gagarin flew to space on April 12, 1961, less than a month before Shepard. The Soviet Union beat the United States in the Space Race—first with a satellite, then with a man. I visited the Soviet Union as a college student in 1986, shortly after the Challenger space shuttle accident, the Chernobyl nuclear power plant accident, and my father’s death from cancer at age fifty-three. I was twenty-one years old, on the cusp of adulthood, the same age my mother was when she watched Shepard’s flight in that upside-down year: the numbers nineteen and sixty-one are upside-down images of each other, and the year became topsy-turvy with Cold War tensions. 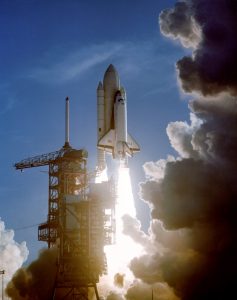 Eleven shuttle missions occurred while I was in high school and three more during my first semester of college (1981-1984). With each mission, Shuttle opened space travel to more kinds of people. That didn’t start right away. On April 12, 1981, the STS-1 crew consisted of two white men who had been born in the 1930s and had served in the Navy: John Young and Bob Crippen. By STS-5 in November 1982, though, the crew included two mission specialists—Joseph Allen and William Lenoir—and the program was overtly thinking more broadly about who was best suited to do what in this long-term effort.

These excerpts are adapted from Generation Space: A Love Story. Available at Amazon, Stillhouse Press, and elsewhere.