I was not in favor of the space program.When John Glenn took off, I was in study hall in college. I remember having a hard time finding a seat and then I realized the nuns had brought in a small black and white TV so we could watch take-off. The rosary beads came out, and we all started to pray.

I was facing finals and I needed to do well since the federal program had given me a loan of $400. This was the first time our Catholic college had received federal funds. Each year you taught, they would reduce your loan by 20 percent. In the early 1960s, $400 was a huge loan. So I wished John Glenn good luck, but I had wished they were all praying for me in stead of Glenn.

Every nun was in love with Glenn. They did not even care what religion he was. 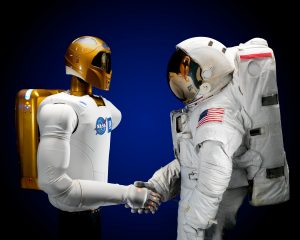 Meanwhile, I was heading to teach in the inner city and ready to cure poverty and any problems that my students would have to deal with in there lives. I thought the money spent on the space program should be sent on the poor. I never understood why just because the Russians did it we had to do it. I know the Cold War was on, but I thought it was like a kid saying, I need those gogo boots because my best friend who is not really my best friend has them. I thought, I guess we need to plant our flag. Manifest destiny, and all that–okay.

Now I am a senior citizen. We still have the poor, but the space program has helped us in so many ways, including robotic activities for the para- or quadriplegic person. I became a speech pathologist and worked on rehabilitation units, so I saw how technology mattered to real lives. I have visited space museums and still can not believe what they accomplished, even if they were–when I first watched in college–all white men in white shirts with thin ties in the space center. So, now I am so proud of the space program. 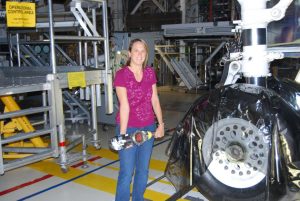 I was 8 years old, it was April 12, 1981, and I watched as the first space shuttle launched from the Kennedy Space Center. I knew at that moment I wanted to work on Shuttle.

I never looked back. Everything I did growing up was to fulfill that dream. In 1990, I moved from Philly to Florida to go to college. And in 1996, that dream came true. I started working on the space shuttle as an Electrical Engineer. 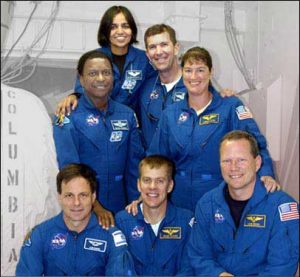 One of the most fulfilling experiences in my life was working the Columbia recovery in Texas. I worked with amazing firefighters from Wyoming, Los Angeles, and New Mexico for twenty-five days in order to bring Columbia home. I made friends that I will have for a lifetime. The only thing I would ever trade that experience for would be the crew.

Space exploration is in my veins. I will always be part of the space program, whether as an employee or a supporter.

In early May of 1961, more than four years before I was born and long before she deemed my sister’s holiday ornament Sputnik, my mother (Mary Lee Leahy), still a college student, was in a car accident. Bruised and sore, she lay in a hospital bed. When a nurse brought her personal effects from the Emergency Room, my mother noticed cash missing from her wallet. The nurse said that Chicago’s police accepted such items as perks of the job and she was lucky all her jewelry was there. This was Mayor Richard J. Daley’s city, known not only for corruption that included the police but also for vote rigging in the presidential election of John F. Kennedy the year before. (My mother, much to her satisfaction, would later win as an Independent candidate to the Illinois Constitutional Convention against Daley’s political machine.) 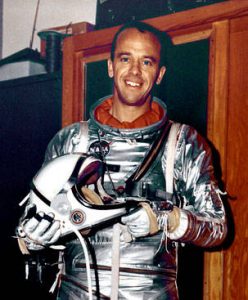 On the morning of May 5, a doctor came into my mother’s room. He turned on the TV, and other physicians wandered in. My mother’s room was one of few in the hospital to have a television set; it was crowded that Friday. Across the country, forty-five million people watched the same event: the first American in space.

While a quarter of the nation prepared to watch on television the launch of Alan Shepard inside his Freedom 7 capsule, the beaches and roadways near Cape Canaveral were also crowded with the curious. This launch was the culmination of a two-year public spectacle. Since the first press-packed announcement of the hopeful spacefarers of the Mercury program—the Mercury Seven, as they were commonly called—these astronauts-in-training had never been far from the public eye. The Cold War American media fed the public’s gaze.

I was a child during the beginning of the race to the Moon. I can’t remember my age, perhaps 4th or 5th grade When John Glenn was to be sent into space for the first American manned orbit of Earth, there were several days that the weather was inclement for the launch over Cape Canaveral. I felt that my observation of this take off was detrimental to the success of the mission.

I was in love with Apollo! Each morning the spacecraft was to go off, I had to convince my parents that I had a sore throat so I could stay at home to watch the mission on television. I don’t recall how many days it was until the weather cleared and the mission took place as rescheduled. I have never asked Mom and Dad if they ever believed my story.

I would watch the launches today. I wish they were televised now, as they were in the times when science was important.

I was 15 when the tenth anniversary of the Apollo-Soyuz mission rolled around. I was attending a space-themed summer program, and we carpooled to the National Air and Space Museum in Washington, DC, for a symposium commemorating the event. Standing in the museum near John Glenn’s Friendship 7 capsule, I about jumped out of my skin when our teacher told us the cosmonauts and astronauts would be in attendance, too. 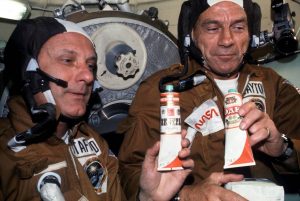 After one of the symposium lectures, I worked up the courage to approach Deke Slayton—one of the original Mercury astronauts and the docking module pilot of the U.S. crew for the Apollo-Soyuz mission. I stumbled through a halting introduction—during which Deke seemed to think I was a museum intern. That made me laugh, and I relaxed just enough to tell him how much I admired him.

Deke had been grounded during the Mercury program for an irregular heart rhythm. (I would be diagnosed with my own mitral valve prolapse in 1997.) But he didn’t quit the program. He stuck with NASA and became “chief astronaut,” advocating on behalf of the astronaut corps, finally making it into space for his one and only spaceflight on Apollo-Soyuz.

I’ll never forget the look on his face when I told him what a hero he’d been to me, for his courage and his perseverance. Visibly humbled, he told me how much those words meant to him, and he hugged me. I still get teary thinking about that.

My own health issues mean I’ll probably never leave this planet, but I am finally starting to write space-faring fiction. I’d like to think that would make Deke smile. 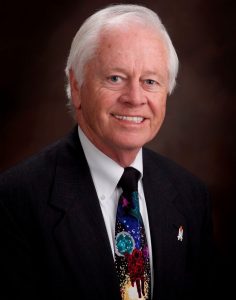 I started my career in rocket propulsion in 1959 working on the Minuteman I- ICBM and later I worked on nearly every ICBM, including the Air Force’s Minuteman I,II, & III and Peacekeeper and the Navy’s Poseidon C3 and Trident I & II. However, my most memorable experience was working on the Space Shuttle solid rocket boosters.

This turned out to be a life-changing experience for me because of the Challenger accident that I had tried to prevent because of the concerns raised by engineers about the ability of the O-rings in the field joints to properly seal in such cold temperatures. When Challenger failed, I ended up in the spotlight because I revealed this problem to the Presidential Commission investigating the accident after NASA had told them there were no concerns raised the night before the launch.

I was immediately removed from my position as Director of the Space Shuttle Solid Rocket Motor Project at Morton Thiokol. I was later reinstated to my position by an act of Congress–the only person in American history to which this has ever happened. I was given the job of leading the effort to return the space shuttle to safe flight ASAP, which was accomplished 32 months later. Even though I will never forget Challenger, I am most proud of the 110 consecutive successful launches of the Space Shuttle with the redesigned solid rocket boosters prior to retirement of the Space Shuttle in 2011. I am particularly pleased that a 5-segment version of these boosters has been selected to boost the next generation launch vehicle, the Space Launch System (SLS).

I wrote a book called Truth, Lies, and O-rings: Inside the Space Shuttle Challenger Disaster about my experiences with the help of Dr. James Hansen from Auburn University. Dr. Hansen also wrote Neil Armstrong’s biography. 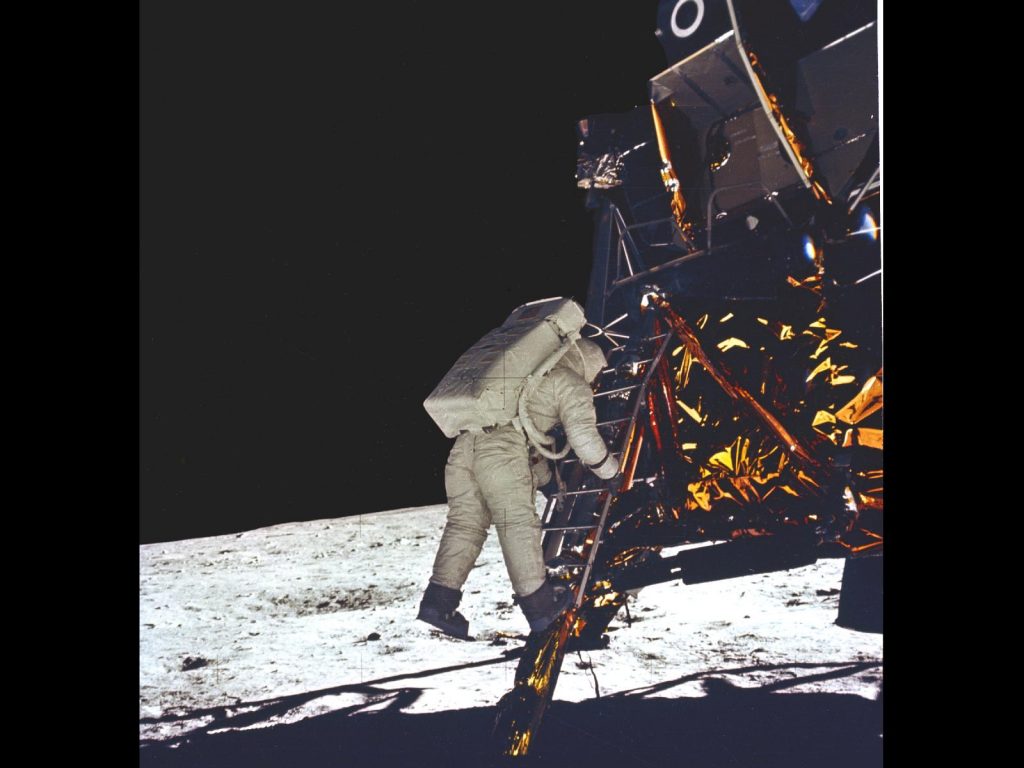